Chinatown’s Buddha Bodai stands out in its crowded neighborhood.

In a community where few restaurateurs speak fluent English, Buddha Bodai’s co-owner Kent Zhang is the exception. The eatery is also among the minority in the area to accept credit cards, and its menu—both kosher and vegetarian—has earned it plenty of media attention over the years.

Despite these advantages, Buddha Bodai is similar to nearly half its neighbors in one big way: It has earned a dubious Grade Pending from the city’s Department of Health and Mental Hygiene, and B and C grades for past inspections.

In Chinatown, a neighborhood with nearly 300 restaurants, just 51% of them boast an A letter grade, according to the Chinatown Business Improvement District, compared with 80% of restaurants citywide. The preponderance of eateries with a dreaded B or C contributes to the area’s ongoing struggle to attract tourists and locals alike because of negative perceptions about the restaurants there being dirty and vermin-infested.

Some business owners say lower grades affect revenue by as much as 25%, which is compounded by the hefty fines they pay. The most common critical violation is related to food that is not kept at the proper temperature, but there are also a fair share of violations that cite evidence of mice and roaches.

Even frequent customers of poorly graded restaurants are turned off. Mr. Zhang’s regulars told him when the restaurant had a C that “they were sorry to see it and don’t like to see it,” he said. 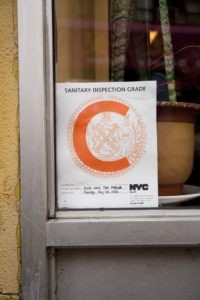 Photo: Buck EnnisOnly half of Chinatown’s 300 restaurants have an A letter grade.

The year-old BID is trying hard to reverse this damaging trend. Chinatown’s restaurants are the community’s economic engine, accounting for 40% of the businesses there. The BID recently sponsored a free workshop on how to earn an A. Ironically, the seminar took place on the same day Mayor Michael Bloomberg advised New Yorkers to eat only at restaurants that have an A grade.

“The workers are dependent on these restaurant jobs in Chinatown because they don’t speak English,” said Patrick Kwan, communications and development director at the BID. “If you have restaurants not being patronized, it drags down the wages and income for the community, which already has one of the highest poverty rates in Manhattan.”

More than 40% of households in Chinatown, where the median income is $26,000, are impoverished, the Census Bureau and the city’s Economic Development Corp. say.

The consequences of a low grade from the Health Department goes beyond a loss of customers. The BID estimates that restaurants in Chinatown have forked over $600,000 in fines during the past year.

“If you are on a C cycle, you’re paying up to $10,000 a year,” said Rada Tarnovsky, president of Letter Grade Consulting Inc., which conducted the free workshop. Violations that result in a B or C grade trigger multiple visits a year by health inspectors and repeated fines.

The point of the three-year-old letter-grade system, according to the Health Department, is to lower the incidence of food-borne illnesses in the city by pressuring restaurants to improve their sanitary conditions. Since 2010, the number of salmonella cases in the city has dropped by 14%. But the city cannot yet track where people are becoming infected, said a spokesman for the agency, so despite the higher incidence of low grades in Chinatown, there is no evidence suggesting that restaurants there are the source of more salmonella cases.

Change won’t come easily in Chinatown, where some restaurateurs, including Mr. Zhang, believe a B grade is “fine” or that an A is too difficult to achieve.

“Every day, I tell my staff the inspectors are coming,” said Mr. Zhang. “I’m ready, but I don’t think we can get an A. The inspectors always come when we are so busy.”

Moreover, many restaurant owners do not challenge the inspection reports by going to court because it means losing a day of work.

“It’s not worth it to fight sometimes,” added Mr. Zhang, who works six days a week.

Chinatown is not the only neighborhood with a higher number of Cs and Bs. Restaurants in largely ethnic communities such as Jackson Heights and Flushing, Queens, and Washington Heights in Manhattan have a similar profile, said Ms. Tarnovsky.

“Most restaurants are afraid of bad Yelp reviews or Twitter posts,” she added. “But social media is not generally relevant in those communities.”

Some owners say that striving for an A grade is not worth the trouble.

“If the kitchen is very clean, it means the restaurant is slow,” said Ken Yang, general manager of Peking Duck House, a sleek destination restaurant at 28 Mott St. The restaurant has a B, with the most critical violations being a cold food item not kept at the proper temperature, lack of a hair restraint and a soiled outer garment with a possible contaminant. “Customers know,” Mr. Yang added, “that no one is perfect.”

Others say that getting the highest grade is just luck. “We just got a good inspector,” said one owner, who runs two restaurants in Chinatown—one with an A and one with a B—and who did not want to be identified or have her restaurants mentioned because she fears retaliation by the Health Department.

Her A restaurant previously earned a C because an inspector found mouse droppings, she said. After Superstorm Sandy, a lot of rodents were displaced by flooding in lower Manhattan and made their way to Chinatown’s congested streets.

The restaurateur said she had to increase pest-control measures at her eateries, but she changed nothing else and still earned an A.

She and her management staff don’t speak English fluently, which may have contributed to the lower grade at her second restaurant. That eatery earned a B during an inspection in October largely because her chef did not place a sign in front of 20 ducks that had been recently cooked and placed outside the oven to cool. The sign should have included the time that the ducks were removed from the oven. So, the inspector told the chef to throw out the fowl, which were below the required 140 degrees.

Poring over an eight-page inspection report, the staff was both confused and incensed over this requirement and wasted food.

Buddha Bodai was also cited for temperature issues for the soy product used in its faux meats. Mr. Zhang was incredulous about that fine, adding, “There is no time for food to spoil because we get it out to customers so quickly. We are busy.”

By Lisa Fickenscher
View on: http://www.crainsnewyork.com/article/20131110/HOSPITALITY_TOURISM/311109994/half-of-chinatown-restaurants-get-b-or-c-grades