N.Y. Times: Restaurants Follow Consultants’ Advice to the Letter for an A Grade

Restaurants Follow Consultants’ Advice to the Letter for an A Grade

Like actual health department inspectors, the company’s inspectors show up unannounced. They do what real inspectors do — they are themselves former health department inspectors — and they spot-check everything from the temperature of food in refrigerators (at or below 41 degrees Fahrenheit) to the three-compartment sink required when dishes and glassware are washed by hand. (Mr. Lubarsky would not identify the restaurant with the mouse under the bucket, beyond saying that it was in Manhattan and that it passed its next real inspection.)

In the five years since the health department introduced letter grades, the blue As have become common in restaurant windows, along with a smattering of green Bs and orange Cs, the lowest possible grade. Restaurant letter grades have proved popular with health-conscious consumers, and officials say that food safety has improved, with an 18 percent decrease in restaurants cited for evidence of mice since 2009, the year before the letter grades started. Some landlords now write clauses into leases that require a restaurant to maintain an A grade or risk eviction.

The health department imposed letter grading as other data-driven measurements were becoming a reality in the city and beyond. A statewide ranking system for teachers went into operation in 2012, and third through eighth graders now face standardized tests.

And whenever a new performance measure comes along it is almost inevitable for new businesses to pop up, promising help on becoming good test takers.

Like expediters who have long offered assistance to New Yorkers in obtaining permits from the city’s Buildings Department, some restaurant consultants are former city inspectors. They say they serve the public by reminding restaurateurs and employees about food safety.

Obviously, though, they also serve the food industry by counseling restaurant owners and chefs in how to pass an inspection — or, as Ms. Tarnovsky put it, “how to be inspection-ready every single day.”

“I tell people an inspection is a picture,” said Dr. Melvin N. Kramer, the president of EHA Consulting Group, another restaurant-consulting firm. “It’s a picture from the date and time of the inspection and, if it was an A, that doesn’t mean that evening it wouldn’t have gotten a different grade.” 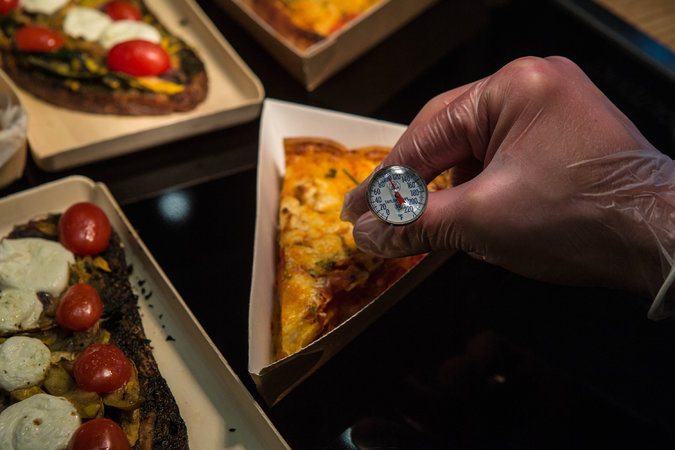 The health department has been checking restaurants for safety and sanitary problems for decades; newspapers once published weekly lists of violators. But the department stopped distributing the lists in the 1980s after an extortion scandal involving inspectors who demanded payoffs from restaurants. From then until the letter grades began, violators were identified only in agency documents that consumers rarely saw.

How many restaurant consultants there are is difficult to estimate. Some, like Mr. Lubarsky and Ms. Tarnovsky, not only counsel restaurants in best practices, they also play restaurant-world Perry Masons or Alicia Florricks, representing restaurants before the city’s administrative tribunal that can reduce penalties or dismiss violations altogether. Nearly 300 representatives are currently registered to appear before the tribunal, but some of them have never done so, and some consultants leave it to the restaurateurs to argue their own cases.

Mr. Lubarsky and Ms. Tarnovsky began as lawyers in Brooklyn handling leases and contracts for a few restaurants, among other clients. When their restaurant clients heard about the new grading system, they called them asking, “What do we do?”

Mr. Lubarsky and Ms. Tarnovsky asked themselves the same question.

“We knew there was a market to be created,” Ms. Tarnovsky said. “Restaurants were not thrilled about letter grades, but consumers liked it, the transparency of it. We figured if we helped restaurateurs learn to comply, it was to the good.”

But first they had to master Article 81, the section of the city health code that covers what the health department calls “food establishments” — restaurants, cafeterias and even food trucks on street corners. Article 81 has over 30 sections in about as many pages and in a booklet from the department.

Mr. Lubarsky and Ms. Tarnovsky learned that problems can add up quickly on restaurant inspections.

To receive an A, a restaurant can be cited for no more than 13 points. A restaurant that has 14 to 27 points in an inspection gets a B. Twenty-eight points or more earns a C.

Some transgressions carry high weights: If kitchen workers do not have hairnets or hats, the inspector can add 14 points, enough to fall out of the A range. Failing to keep food at the right temperature is a violation with a minimum of seven points. The inspector can also impose fines for violations.

Still, the department says that more than 90 percent of the city’s 24,000 restaurants currently have A grades and that 58 percent receive the grade on first inspection. If a restaurant does not score in the A range on a first inspection, a grade is not determined until the restaurant has been reinspected.

But some things remain unchanged, among them, Mr. Lubarsky said, appearances. Or, as he put it, “how to act when a department of health inspector is there.”

“Department of health inspectors, they react to unnecessary panic,” he said, which is why he and Ms. Tarnovsky advise their clients not to make too much fuss when an inspector shows up.

They also advise restaurants to keep charts and logs showing information such as when a shipment of meat was delivered. The date could be useful later on, in challenging a violation for spoilage.

Some restaurateurs and consultants say the inspections generate money for the city — more than $26 million a year in the fiscal year that ended in June — and that some regulations mainly serve to simply rack up points and fines. (The health department says the total paid in fines was down 18 percent from the previous fiscal year, a sign that restaurants are doing better at complying with the rules.)

Dr. Kramer, of EHA Consulting Group, mentioned a regulation prohibiting fruit flies as a prime example, a mandate he said was not based on evidence.

“I have never heard of any disease and I don’t know of anyone who can show me any peer-reviewed journal article that shows that fruit flies carry disease,” he said. “A house fly is a filth fly. A sewer and drain fly is a filth fly. There are so many other issues that impact the public health. Fruit flies aren’t one of them.”

By: James Barron
View on: http://www.nytimes.com/2015/10/05/nyregion/health-exam-help-for-restaurants-to-avoid-rodents-or-worse-a-c.html?_r=1